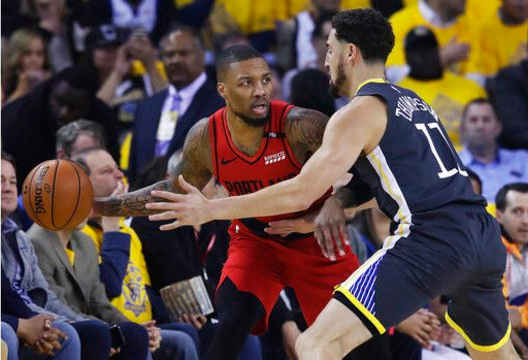 In a game where the Blazers were up by as much as 17, they couldn’t hold on to win a very close game at Oracle to give Golden State a nasty 2-0 lead in this series.

The Blazers had twice as many threes, and shot better from 3 point range. They had less turnovers and a great input from their bench but they still lost this game.

Seth Curry had a great game 5-9 and 4-7 from three for 16 points, Rodney Hood shot 50% and had 12 points. Granted CJ and Damian Lillard didn’t have the most efficient shooting night they still contributed 22 and 23 a piece.

Quite frankly, when they were up 15 at the half, you thought it was all over and it should have been. But we forget that 15 point deficits are not longer a problem in the modern NBA, especially for the Golden State Warriors.

After managing to tie the game at the end of the third, Golden State went down 108-100 in the fourth but managed to pull another rabbit out of a hat to take the lead with a minute to go.

In fairness, give credit where credit is due: The Golden State Warriors are a phenomenal basketball team. Even with better switches (well sort of) by Portland defence, Steph Curry still had 37 points, 8 rebounds and 8 assists, Draymond Green had a near triple double shooting 8-12 with five blocks and Kevon Looney (my favourite player) was 6-6 from the field with 14 points. Oh and Klay had 24 points just casually.

The Warriors played 12 players again and had a great defensive effort from their bench. Also their small ball line up with Jordan Bell at the five, actually worked rather decently (well at least it didn’t suck).

Lest we forget the true hero of this game. With the game on the line and Dame Time with the ball, Andre Iguodala had a game saving steal that allowed Golden State to run out the clock and win the game.

The last two plays of the game for Golden State offensively showed their pass first nature that has gotten them so far every year in the Playoffs. They wait for Steph or Klay to get double teamed and then kick the ball to Green or Iggy in the lane for a layup. It’s gold.

Also the Warriors managed to get to the line 10 more times and block 8 more shots, which helped them creep over the line.

Enes Kanter was snuffed again and only played 19 minutes for 4 points, with Zach Collins managing 5 fouls in eight minutes with no points. The Blazers two primary big men need to find a way to make an impact in this series if the Blazers have any chance of winning.

Steph was 37 points, again a phenomenal performance and Seth Curry had his career Playoff high 16 points. Both were efficient and Seth even had a slightly greater +/- in the game. I would say that it was a close tie if we are looking at their individual roles alone as a superstar and bench spark.