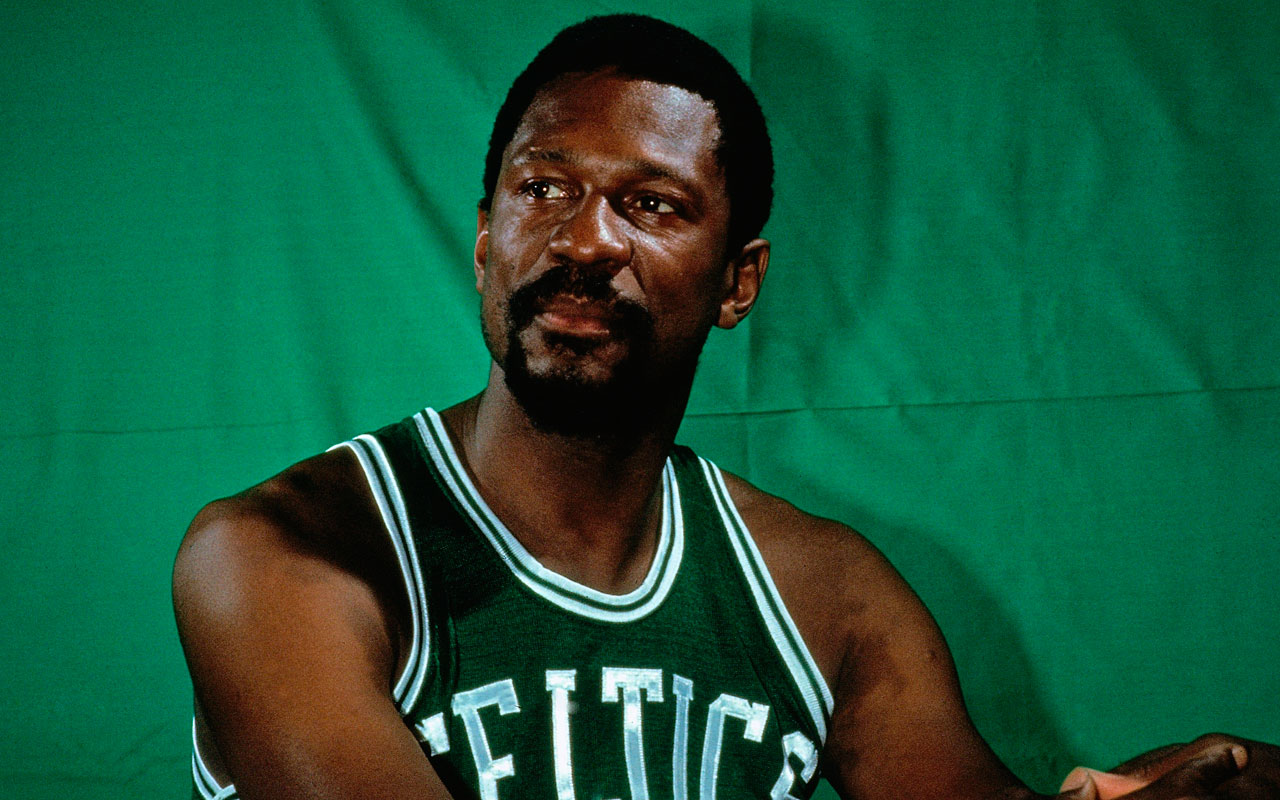 There have been many players whose legacy has been either diminished or forgotten because of the pages of history.

Jerry West, Pete Maravich, Bob Pettit, John Havlicek and Elvin Hayes all have had incredible careers that seem to be discounted because of the era that they played in.

None more so than the career and legacy of Bill Russell.

Russell, in my opinion, is still the second greatest player of all time (behind Jordan). His playing career is nothing short of remarkable.

The greatest winner in NBA history has been discounted to the point that you are scoffed at when mentioning his name in any historical conversation. His legacy forgotten by the winds of time.

It would not do Bill Russell justice to not acknowledge the strength of his character and his quest for social justice.

Russell began his playing career in one of the most racist and segregated cities in America during the 50s – Boston.

His whole life, let alone his playing career, was an uphill battle against racism. A seemingly never-ending duel that would plague him from his childhood well into his adult-life.

As a child, he witnessed racial abuse against his parents. As a player at USF, he would be attacked verbally by white students. Even as a player, especially a player with the reputation that Russell had, he would be constantly discriminated against.

During the 1958 offseason, the NBA toured it’s All-Stars around the country to help promote the league. White hotel owners in North Carolina denied Russell and his fellow black teammates rooms to sleep in. Russell was also due to play in an exhibition game before the 61-62 season but was denied service in a restaurant in Lexington, Kentucky (where the game was to be held). He, and the other black teammates who were refused service, proceeded to fly home and not participate in the game.

“It stood out, a wall which understanding cannot penetrate. You are a Negro. You are less. It covered every area. A living, smarting, hurting, smelling, greasy substance which covered you. A morass to fight from.” – Go Up for Glory.

Russell was a human rights activist first, and a basketball player second.

He had a rough relationship with the local Boston fans during his playing days and even after his retirement – refusing to attend his jersey retirement ceremony in 1972.

It has since been somewhat reconciled, but the bigotry and segregation experienced by Russell who went on to be a pioneer for African-American rights in America is a testament to his character.

There was no one else more deserving to be the first African-American head coach in North American professional sports.

When judging players historically, context has to play a major part.

To say that Russell could not play in this era is a spit in the face to the skill and determination that this man possessed.

You may be right, but there are more factors that come into play rather than just dropping him into the league today. What training regimes did they have back then? What knowledge about the game was there? What equipment? Structures around the sport? Diet? Travelling to and from road games?

Russell grew up with his own set of circumstances. He grew up in a time where jump shots were taken 4 metres from the bucket and the 3-point line wasn’t even a pipe dream.

He played in Chucks for goodness sake.

In an era where diet and exercise science were as unsophisticated, of course if you placed Russell in today’s game, he would not be the same.

But there was a reason Russell was as dominant in his era as he was. It was because of how good Russell was.

He dominated the sport. Not just the league, but the sport. He won at every level imaginable and did so as the best player on each team.

It is the 35th anniversary of the league and a vote is conducted to figure out the greatest player of all time (at the time). Basketball writers, experts and pundits all participated.

The league, at the time of voting, had 23 teams – a steep jump from the 8-9 teams that existed during Russell’s time in the league. But guess what argument was not brought up at all.

“Russell played in a weak era”.

With such a small number of teams in the league, it meant that stars would routinely play each other – rather than 2-3 times in a season that we are used to nowadays.

Russell and Wilt duelled 142 times during a ten-year period in their careers. 142.

Larry and Magic – who duelled for close to 11 years – only played each other 37 times.

The final pick of the 3rd round in the NBA draft during the 60s would be the equivalent to the 24th pick in today’s league. Only the cream of the crop made it to the league because if you weren’t good enough, you would be eaten alive by the competition you would face every single night.

Wilt is the obvious comparison for Russell.

A lot of these points are taken from Bill Simmons’ ‘The Book of Basketball’ (which if you haven’t already read, I don’t know what you’re doing with yourself) as he articulates this argument in a way that cannot be expressed any better.

Wilt is generally credited as the better all-around player than Russell, with his offensive skills seeming to trump that of Russell.

While this may be true, Russell’s offensive skills have been bastardised to a level where they seem laughable when compared to Wilt. This is not the case.

Historically we glorify teams that play unselfishly (with the classic Spurs teams of the 21st century immediately coming to mind), but we also punish those who don’t appear as frequently on the box score as others (as has been the case for Draymond Green this year, but I’ll save that for another article).

Wilt was the O.G. stat chaser. He cared more about the numbers on the scoresheet than coming off the court as a winner.

Wilt explains this in his own words:

“I was 30 years old when the ’66-’67 season began, and I was maturing as a man, and learning that it was essential to keep my teammates happy if I wanted my team to win.

“Instead of me averaging 40 points a game, we had a great scoring balance. Hal Greer averaged 22.1, Chet (Walker) averaged 19.3, and Billy (Cunningham) averaged 18.5. Luke Jackson and Wali Jones also averaged double figures. That’s the kind of balance Boston always had.” – Wilt: Just Like Any Other 7-Foot Black Millionaire Who Lives Next Door.

It was also at the end of that season that he won his first ring (who would’ve thought?).

That 66-67 Philly team has been widely credited as one of the greatest championship teams in history. Finally, Wilt had hit the winning formula and he would contend Russell’s legacy with the second half of his career, right?

The very next season, Wilt became obsessed with assists. So obsessed that he would pass up easy shots to set up teammates and checking the scorer’s table multiple times a game to keep an eye on his numbers – even complaining if he felt that he hadn’t been credited with specific assists.

The season after he made a big deal of keeping his teammates happy, he would criticize his teammates for blowing his passes or missing shots.

I will admit, Wilt’s statistics seem to humble that of Russell’s, but Russell was the most dominant defensive player to ever step on the court.

Wilt would spike shots in the 10th row of the stands, but Russell would deflect shots to his teammates to spark a fast break – something that Auerbach’s Celtics were built on.

Opposing teams would eventually give up trying to score around the rim and settle for outside shots – which in an era that revolved around inside scoring and was notorious for poor jump shooting often resulted in scoring droughts.

Russell could affect offenses without even contesting a shot.

The stats that matter – wins – speak for themselves between the two.

Wilt’s record in elimination games for his team: 10-11.

Russ’s record in elimination games for his team: 16-2.

But there is one stat that truly shows his greatness… titles.

When one takes the basketball court, they have one goal in mind.

No one, especially not professional basketball players, takes the court to only score 50 points. No one takes the court only to dunk on someone or break someone’s ankles.

They take the court to win.

Winning is the be-all and end-all.

Winning, no matter the sport, is the only thing that matters. No matter how good of a performance one has, if you lose it doesn’t matter. If you could not push your team over the line to win the game – you did not do enough.

The greatest goal in the game of basketball is to win the NBA championship, to do that 11 times is something that should not have been possible.

It is something that we will never see again.

These 11 championships set up the basis for one of the most respected franchises in the history of the sport. The Boston Celtics are so entrenched in the culture of basketball that one cannot think of the sport without mentioning the team.

All names that benefitted from a system set up by a figure so transcendent that he set up a franchise to win for decades to come.

The glory attached to the Celtics jersey in the early days of the league is a feeling that has never swayed. Seeing the banners hanging in the TD Garden is a reminder to the dominance that one man had on the entire league – one that will never happen again.

Bill Russell deserves all the credit that is possible to attribute to one person, not only for his on-court career but also his off court achievements.

I will leave you with the video of Russell receiving his Lifetime Achievement Award during the 2017 NBA Awards. Russell’s words best sum up his career than anything I could ever write.